Advance creativity and collaboration in research

Does Marriage Improve the Financial Status of Women? A Japanese Study Provides Answers

Prof. Yoko NIIMI, Faculty of Policy Studies, published a paper that finds a negative relationship between marriage and wealth among Japanese women, contrasting with most Western countries.
By examining personal wealth based on the actual ownership of assets, Prof. NIIMI found that the personal wealth of women declines after marriage. In addition, in Japan, gift taxes are imposed even on gifts between spouses, discouraging husbands from making joint investments with their wives.
Prof. NIIMI says that these findings will hopefully help raise awareness of how wealth is distributed among married couples in a legal sense in Japan and how financially vulnerable Japanese women are even after marriage.

This achievement has also been featured in the “EurekAlert!”.
Does marriage improve the financial status of women? A Japanese study provides answers (EurekAlert!)

For more details, please see the link below.
Research News: Does Marriage Improve the Financial Status of Women? A Japanese Study Provides Answers (Website of Doshisha University Organization for Research Initiatives and Development) 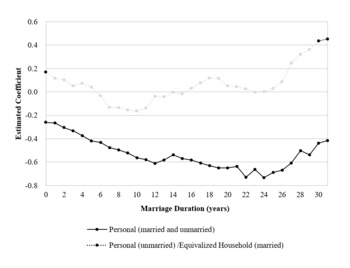